Speak in App  is born to teach to the youthcommon daily language and expressions that could be useful when it will be the time to face British world tomorrow.

Giving birth to a tool to face the speech wasn’t a task for Klimax company.

It goes without saying that when you give birth to a child, you start missing the pregnancy period. That’s the reason why it is essential to thank everyone who took part in this short and intense ‘pregnancy’ with this photo gallery.

I would like to thank Walter Lippa for his friendly cooperation, Roberto Cascone for his photos, Valentina Cerasuolo for costumes, Raffaele Miele for videographing, Giulia Pagnacco who performed the character “Siri” and helped us with the script, Jessica Cecil-Wright who performed the character  “Server” and translated the script in English, Gabriele Toralbo for lighting design, Saverio Tedesco for sound, Angelo Parlato for audio and visual istallations, Antonio De Muro for video footage, Federica Cossentino for the make up, Marco Calamaro for editing, Gennaro Bove for his technological support and setting videographers, Daniele Ferrara for his digital support, Ultrafrequenze for sound and lightning technic support, and last but not least, I would like to thank Beatrice Schiaffino who performed twelve characters in this showmarvelously. 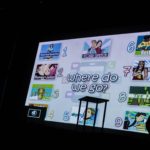